Treble and midrange sound system is the most vulnerable vulnerable components, consisting speaker voice coil line is very thin, with the power amplifier impedance mismatch, as well as regulation and not the time, often due to accidental or sudden large current and burn:


1,Treble amplifier and subwoofer combination , so that the tweeter in the ongoing work under high load .

2,Now speakers are usually dispensed individually designed and sold , rather than and amplifier match together. Thus, if you choose properly, it will probably due to mismatch of the entire system damage.

3,Bass amp for some reasons in the operation of the overload current shock who were received . This problem during playback of the tone having a relatively wide range of high -density optical disc homeostasis sometimes occur .

8,Drop the microphone and collision will produce a large current treble damage tweeter ;

Any of the above conditions can damage the woofer high school, once damaged, the entire sound system will be forced to stop using, because of their size, heavy weight, repair and maintenance is very inconvenient, it must sound speakers and high school circuit overcurrent timely and effective protection, in order to avoid these problems be sure to use.
三、How to protect high school woofer?

1, the most commonly used is a one-time fuse, speaker system protection requirements more stringent.       Ordinary fuse from the speaker only disposable protective effect , the product failure rates rise ; addition, extra fuse box and wires to make the manufacturer's costs. Also, the use of fuses must also comply with specifications, wrong fuse causes speaker damage.
2, the installation breaker is a solution ; however, they have not disconnected before you start making noise when switched off .
3, using the unit circuit protection program, which is very good, but need to sampling , amplification, compared with the control waits for a series circuit , not only the number of components and more, procurement costs are high , but high failure rate, production debugging difficult, general seldom used.
4 , using a small resistor in parallel with a small light bulb ways of doing protection circuit , the circuit is simple , but the loss, in addition to simple sound outside is generally not used .
The protection methods have advantages and disadvantages , and recommend the best , most direct , most reliable and cost-effective solution is to use "WHPTC resettable fuse element " resettable fuse in the off state ( high-impedance state ) when the equivalent of a soft switch the failure to eliminate , it will automatically revert to the state of low resistance path .

五、WHPTC application and installation process as shown below: 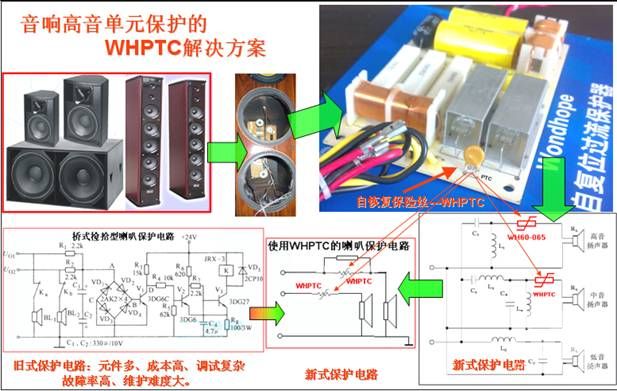